It’s almost summer, the sun is high and it’s heating things up @ the beach! It’s time to strip off your clothes and set up your grindr once again! Hunting season has already started… 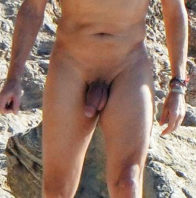